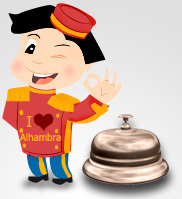 One of 12 marble lions that stand watch in Spain’s historic Moorish palace, the Alhambra, in Granada returned to its spot Monday after being restored by experts.

A miniature crane lowered the 300-kilogramme (660-pound) stone beast into place at the foot of a fountain in the Court of the Lions at the heart of the palace, one of Spain’s biggest tourist attractions.

“It is a historic event,” said Paulino Plata, a cultural official for the Andalucia region, as the lion returned to the spot where it had sat for centuries before it was moved for four years of restoration work.

Rich in Islamic art and architecture, the Alhambra was a fortress for the Nasrid dynasty which lived there from the 13th century. The Court of the Lions was built in the 14th century by Sultan Mohamed V.

The other 11 lions are due to be brought up one by one in the coming days from an inner room where they have been on show pending their complete restoration.

Their makeover was part of a broader project to spruce up the Court of the Lions, which Plata said has cost 2.16 million euros ($2.8 million). The court is due to reopen next year.

The region says more than two million visitors entered the Alhambra in the first nine months of this year.